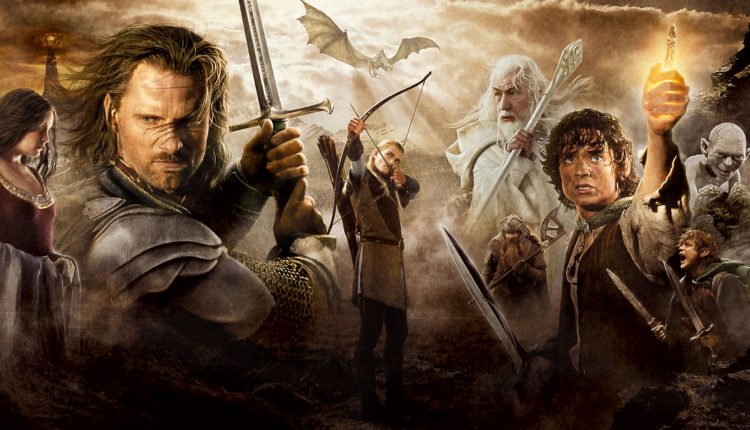 The Lord of the Rings The Return of the King, a 2003 epic fantasy adventure movie directed by Peter Jackson. It is based on the third volume of J. R. Tolkien’s The Lord of the Rings. This film is the last episode of the Lord of the Rings Trilogy. It was produced by Fran Walsh, Barrie M. Osborne, and Jackson and written by Walsh and Philippa Boyens. Frodo and Sam are continuing the story of The Two Towers. They are heading towards Mount Doom in Mordor to destroy the One Ring. Frodo and Sam are unaware of Gollum’s true intentions. Meanwhile, Gandalf and Aragorn are joining forces against Sauron’s legions in Minas Tirith. It was preceded in 2001 by The Fellowship of the Ring and 2002 by The Two Towers.

The Lord of the Rings The Return of the King 2003 Plot:

Smeagol, a Hobbit, and Deagol, his cousin, are out fishing when Deagol finds the One Ring by the river. Smeagol is seduced by the Ring and kills his cousin. As the Ring twists his mind and body, he retreats to the Misty Mountains until he transforms into Gollum.

Gandalf and the eagles fly in to rescue the Hobbits. They awaken in Minas Tirith, where they have reunited again with the remaining Fellowship. Aragorn is elected King of Gondor, and Arwen becomes his queen. Sam and Rosie Cotton marry when the Hobbits return to the Shire. Frodo leaves Middle-earth with Bilbo, Gandalf, and the Elves a few years later. Sam is left with the Red Book on Westmarch detailing their adventures. Sam returns to the Shire, embracing Rosie, their children, and the Red Book of Westmarch.

“- Gandalf: Go back to the abyss! Fall into nothingness that awaits you and your master!
– Witchking: Do you not know death when you see it, old man? This is my hour!”
SIR IAN MCKELLEN – Gandalf
LAWRENCE MAKOARE – Witchking

“Certainty of death. Small chance of success. What are we waiting for?”
JOHN RHYS-DAVIES – Gimli

“- Frodo: I can see the Shire. The Brandywine River. Bag End. The Lights in the Party Tree.
– Sam: Rosie Cotton dancing. She had ribbons in her hair. If ever I were to marry someone, it would have been her. It would have been her.
– Frodo: I’m glad to be with you, Samwise Gamgee, here at the end of all things.”
after destroying the Ring

“- Merry: Are you going to leave me?
– Pippin: No, Merry. I’m going to look after you.”
DOMINIC MONAGHAN – Merry
BILLY BOYD – Pippin

“- Elrond: I looked into your future and I saw death.
– Arwen: But there is also life. You saw there was a child, you saw my son!
– Elrond: That future is almost gone.
– Arwen: But it is not lost.
– Elrond: Nothing is certain.
– Arwen: Some things are certain. If I leave him now, I will regret it forever.”
HUGO WEAVING – Elrond
LIV TYLER – Arwen

“Sons of Gondor, of Rohan, my brothers! I see in your eyes the same fear that would take the heart of me. A day may come when the courage of men fails, when we forsake our friends and break all bonds of fellowship, but it is not this day. An hour of wolves and shattered shields, when the age of men comes crashing down! But it is not this day!…”
VIGGO MORTENSEN – Aragorn

I will not say “Do not weep”, for not all tears are an evil.
SIR IAN MCKELLEN – Gandalf

“- Pippin: Is there any hope, Gandalf, for Frodo and Sam?
– Gandalf: There never was much hope. Just a fool’s hope.”
BILLY BOYD – Pippin
SIR IAN MCKELLEN – Gandalf

“- Gimli: Where do you think you’re going?
– Aragorn: Not this time, Gimli. This time you must stay.
– Legolas: Have you learned nothing of the stubbornness of Dwarves?
– Gimli: You may as well accept it. We’re going with you, laddy.”
JOHN RHYS-DAVIES – Gimli
VIGGO MORTENSEN – Aragorn
ORLANDO BLOOM – Legolas

“The journey doesn’t end here. Death is just another path… One that we all must take.”
SIR IAN MCKELLEN – Gandalf

“- Elrond: The man who can wield the power of this sword can summon to him an army more deadly than any that walks this earth. Put aside the Ranger. Become who you were born to be. Take the Dimholt Road. I give hope to men.
– Aragorn: I keep none for myself.”
HUGO WEAVING – Elrond
VIGGO MORTENSEN – Aragorn

“Now, listen carefully. Lord Denethor is Boromir’s father. To give him news of his beloved son’s death would be most unwise. And do not mention Frodo, or the Ring. And say nothing of Aragorn either. In fact, it’s better if you don’t speak at all, Peregrin Took.”
SIR IAN MCKELLEN – Gandalf

“The mightiest man may be slain by one arrow… and Boromir was pierced by many.”
BILLY BOYD – Pippin

“I do not fear death.”
VIGGO MORTENSEN – Aragorn

“- Gandalf: The grey rain-curtain of this world rolls back, and all turns to silver glass… And then you see it.
– Pippin: What? Gandalf?… See what?
– Gandalf: White shores… and beyond, a far green country under a swift sunrise.
– Pippin: Well, that isn’t so bad.
– Gandalf: No… No it isn’t.”
talking about death
SIR IAN MCKELLEN – Gandalf
BILLY BOYD – Pippin

“- Frodo: I can’t recall the taste of food… nor the sound of water… nor the touch of grass. I’m… naked in the dark, with nothing, no veil between me… and the wheel of fire! I can see him… with my waking eyes!
– Sam: Then let us be rid of it… once and for all! Come on, Mr. Frodo. I can’t carry it for you… but I can carry you!”
ELIJAH WOOD – Frodo
SEAN ASTIN – Sam

“- Gandalf: Faramir! Your father’s will has turned to madness. Do not throw away your life so rashly.
– Faramir: Where does my allegiance lie if not here? This is the city of the men of Numenor. I would gladly give my life to defend her beauty, her memory… her wisdom.”
SIR IAN MCKELLEN – Gandalf
DAVID WENHAM – Faramir

“From the ashes, a fire shall be woken. A light from the shadow shall spring. Renewed shall be blade that was broken. The crownless again shall be king.”
LIV TYLER – Arwen

“- Faramir: Boromir was always the soldier. They were so alike, he and my father. Proud… stubborn, even. But strong.
– Pippin: I think you have strength, of a different kind. And one day your father will see it.”
DAVID WENHAM – Faramir
BILLY BOYD – Pippin

“- Eowyn: I’m going to save you.
– Theoden: You already did… Eowyn. My body is broken. You have to let me go. I go to my fathers, in whose mighty company I shall not now feel ashamed.”
MIRANDA OTTO – Eowyn
BERNARD HILL – Theoden

“A fourth age of middle-earth began. And the fellowship of the ring, though eternally bound by friendship and love, was ended. Thirteen months to the day since Gandalf sent us on our long journey… we found ourselves looking upon a familiar sight. We were home.”
ELIJAH WOOD – Frodo